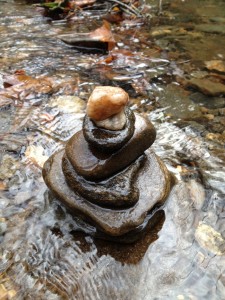 Here it is the day after Christmas and I am up early.  A little after 5 am, why?  There has been a blog brewing in my mind since Thanksgiving and it felt it needed to come out now.  So, in the interest of getting any rest at all today here I go.

It started the Saturday before Thanksgiving.  I was flying to New York to meet my family for the holiday.  Our home base would be my brother’s place and his place was about to get full – loud and cluttered with people, voices, luggage, presents, opinions, ideas, and stuff.  He picked me up at the airport and I announced my quest – to see how many points I could rack up on Foursquare during my seven-day visit.  He claimed his highest score was close to 300, his girlfriend’s was over 400 (she went to Law Vegas).  My highest score up to that time was 82.  Should I shoot to beat my brother, his girlfriend, anybody else?  No, I settled on a goal that I thought was achievable (I did not want to fail – the embarrassment if I did since it would be out there for all to see) – 200 points!  I would learn a lot about myself getting those points – including what wouldn’t I do to rack them up.

My first obstacle was to remember to check in wherever I went.  I am a little older now, and checking in to Foursquare is not a habit with me, so that was a little challenging.  To help me with this obstacle I enlisted my entire family, especially my tenacious niece who made it a point of pride to remind me each time I forgot.  Love her!  She alone accounts for half my points.  My mom joined in (even though her memory is worst then mine) but it was a way for her to “help” her child.  It became a game, my family reminding me to check in, me checking in for the points.  In fact, I believe the key phrase that entire holiday week was “Did you check in?”  I try to recollect now if we said that to each other more than “I love you.”  But I understand now that “I love you” was exactly what my family was telling me as they reminded me to check in.

I eventually ended up with a high score of 557 points – how did I do it.  Thanks to my family I checked in everywhere.  On the bus, in the subway, at the corner truck getting my coffee, each store I went into in Grand Central Station, including various stops in the Market (awesome market!).  It was at the market that I realized you can check in to a place more than once – by checking into sections of the place.  This revelation got me almost 200 points alone as I explored the Metropolitan Museum of Art – points for the Egyptian section, points for the Dandur Temple, points for the mummy exhibition, even points for the Grand Staircase!  Oh, I was on a roll.  And the points were racking up – no longer was 200 for the week enough – no I wanted 200 for the day!  20, 50, 75, 100 points added up on my mobile screen – each one giving me a little boost and then, then – the badges started coming in – Far, Far Away badge, The Warhol badge (4x), Trainspotter, and THE SWARM.  Wow, the Swarm.  Had no idea what it was until my brother explained that is meant many people had checked into Foursqaure in that locale at the same time.  I was now part of a swarm!  I was elated – I was on top, the points, the badges, the check-ins, the game.  And then I went home back to ATL and realized another truth.

Sure I had check-ins that were only about the points.  But then I saw I had taken photos at some of the check-ins, not all, only some.  Why did I photograph those and not the others?  The photos had a common theme – they reflected back on my past, fond memories with family, especially my daughters.  The photo of the New York Aquarium – damaged so badly after Hurricane Sandy it was closed indefinitely.  But I remember that as I walked past it on the boardwalk I heard the seals call out, almost as if saying “we’re still here.”  The photo of the New York Public Library’s Christmas tree – the big library with the lions (and I took a photo of the lions too).  This place that holds so much knowledge and adventure and history – it was running an exhibit about the history of the New York Lunch Hour – from oysters in a cart to the automat to brown bag lunches to the power hour lunch.  The photo of the Tick Tock Diner’s menu – reminding me of one of the reasons I love New York – the food!

But there were few photos on my Foursquare account compared to the photo stream on my iPhone.  Hundreds of photos, of places, people and things that sparked in me one ultimate truth – home.  See, I am a military brat – my dad served proudly in the US Army and is a retired Sargent now.  I believe this is what gives me the travel bug, and a restlessness sometimes to just board a plane and discover a new world.  But New York became home when we finally settled and I went to college and law school there.  I raised my daughters there.  I started my career there and learned life lessons of struggle, perseverance, love and even forgiveness, for I bore witness on 9-11, like so many of my friends at the time – my office was on the 27th floor of the second building.  I was not there that morning having to go meet my daughter’s counselor at school, but just being near and in the chaos scarred both me and my daughter.  We could not get home – we walked across three bridges – from Manhattan to Queens to Brooklyn.  That feeling of not being able to get “home,” not sure if “home” still existed, was devastating.  The check-in that will never happen – Ground Zero.   After that fateful day I never returned.  I would venture no further south than Canal Street and on this visit it was the same.  Does that mean it is less significant because it won’t have a check-in or too important to minimize it with a check-in?

Did the check-ins mean anything else?  For Christmas a special friend asked me to go hiking in the woods.  So we set off early in the morning and ended up at Raven Cliffs Falls trailhead in the North Georgia Mountains.  Packed with sandwiches (expertly made by me I may add), Powerade and Vitamin water, pound cake and sunflower seeds we started.  I wanted to check in on Foursqaure – for safety reasons, so our last coordinates would be known should anything happen – but there was no service.  My friend had a solution, he had a compass that was given to him that had his name engraved on it.  They would know who he was by that.  But it made me think – what about me?  Would they know who I was?  What evidence would there be of my presence there on that day if I could not check-in?  Evidence of existence – is that how we now see our digital footprints – not tangible pieces of artifacts such as letters (we only do email now), or postcards (Instagram please), or silver compasses with our names engraved on them (Facebook status and posts)?  If my cell phone goes away am I lost too? Or am I just relegated to what I’ve already posted online?

And when I return if I do not post on Facebook did the hike even happen?  Did I not see the most amazing waterfall tucked between two high cliffs wedged in a slice of nature and so high my fear of heights kicked in?  Did I not stumble upon a valley of rock piles left by others – who left their marks, physically, by piling those rocks as if to say – we were here – if I do not Instagram the photo of those piles?  Did I not taste and see the clear spring water if I did not Tweet the sensation?  Why do I feel the need to prove it all happened by these digital statements?  In a time where media can be manipulated so easily how do you trust a photo, a video, a Tweet?  And yet, here I am at 5:30 am on the day after Christmas, writing down these thoughts and posting them on my blog to what – prove I had them?

During the hike, I remember the feeling of feeling good, at peace and happy.  My friend said it was natural to feel that way when you return to where you come from – to home.  In New York, did my Foursquare experiment prove I was “home” with all my check-ins? Making my memories official of places I had been to so many times before? In the mountains, did my service failure prove I was not?  Do these just come down to the question of just what is the meaning of “place” and “home” in a digital world?

I don’t need Instagram or Fourquare or Twitter to validate where I’ve been or what I’ve felt.  That is not their purpose.  “Home” is a check-in of the heart, not an app.

Welcome to our monthly recap of interesting stories relating to Cyber-bullying.  These stories cover many issues including: … END_OF_DOCUMENT_TOKEN_TO_BE_REPLACED